The Washington DC metro area recorded the third highest increase in commercial and multifamily construction starts in the first six months of the year, the Dodge Construction Network says.

The DC area ranked behind New York City and Dallas, TX, but ahead of the other top 20 metopolitan areas, which overall saw an increase in construction value of 24% from  2021 according to Dodge Construction Network.

In the Washington, D.C., metropolitan area, commercial and multifamily construction starts rose 35% in the first half of 2022 to $5.5 billion. On a year-to-date basis, multifamily starts gained 14% through six months.

Through six months of 2022, commercial starts sped ahead 57%, with retail as the only sector to post a decline. The largest commercial projects to get started through the first six months were $940 million Digital Dulles Buildings 7 and 8 data center project, the $400 million The Rose Gaming Resort, and the $208 million Equinix data center.

Commercial and multifamily construction has made impressive gains in 2022 largely driven by rising demand for apartments and condos. A nascent recovery in the commercial sector, however, has created more broad-based improvements across the country. These increases are even more considerable as the sector continues to combat rising prices, shortages of key materials and labor, and higher interest rates.

During the first half of 2022, the top 10 metropolitan areas accounted for 40% of all commercial and multifamily starts in the United States, up from 37% during the first six months of 2021. 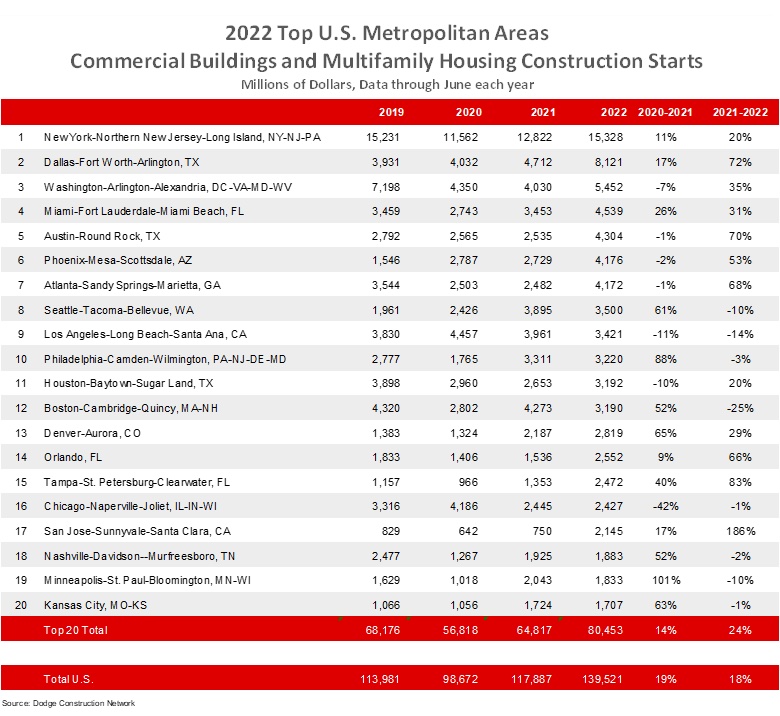 “The construction sector is at a cross-roads,” stated Richard Branch, Chief Economist for Dodge Construction Network. “The recovery from the pandemic morphed in 2022 by encompassing more sectors than just warehouses and single family housing despite rampant inflation in construction materials, a lack of key goods, and a stark shortage of skilled construction labor. Even though the level of projects currently in planning portends a bright second half to the year, the Federal Reserve’s fight against inflation has taken a toll on the economy and raised concerns that a recession could occur. As a result, construction starts are likely to move sideways over the second half of the year and potentially stall as the calendar shifts into 2023.”