The Smithsonian Museum is seeking public input through today (Sept. 19) about five anonymous design proposals for The Bezos Learning Centre, a $250 million transformation of the National Air and Space Museum.

The project is part of a massive multi-year renovation on The National Mall, which began in 2018.

The proposed rebuild of National Air and Space Museum is expected to take approximately seven years.

The project contemplates the demolition of Gyo Obata’s Wright Place to accommodate “The Bezos Learning Center,” with a new restaurant facility, exhibition spaces, and a public observatory, ArchDaily.com reports.

“The design proposals develop different approaches to the historical McMillan Urban Plan and redefine the Role of Museum Education in the Learning Experience.”

Firm A
Based on the hexagon shape, the project looks for efficiency and direct reference to nature and space technology. From the structure of honeycombs to the International Space Station and the James Webb Telescope, the hexagon shows superior flexibility in reducing structural spans and configuring different-scale cells. The cells hold flexible classrooms, terraces, and the rocket atrium.

The design integrates harmoniously with the massing, height, and balcony openings of the National Air and Space Museum. At the same time, its sweeping form connects to the curvilinear shape of the neighboring National Museum of the American Indian. 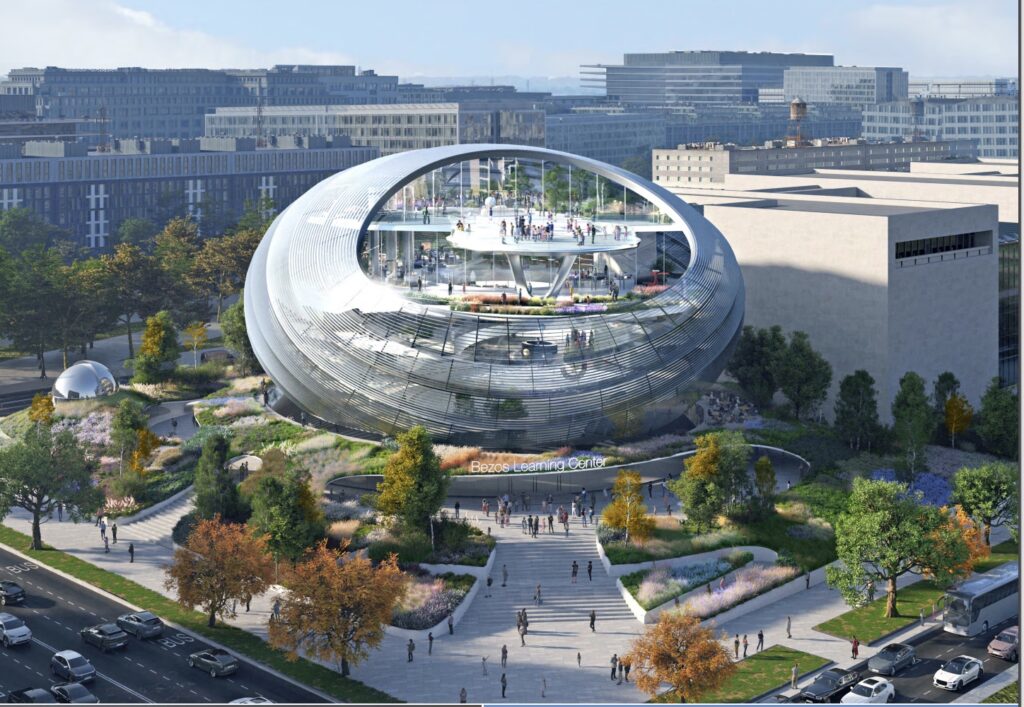 Following the curves and domes expressed in many of the District’s monumental structures and museums, the pavilion extends as a solid glass volume that march down the historic NASM’s existing façade.

The inspiration is a spiral galaxy whose form reflects two-thirds of the known galaxies, including our own Milky Way. The building’s architecture metaphorically places the individual student, educator, and visitor at the universe’s core, surrounded by educational experiences and paths of discovery that lead to infinite possibilities for their future in science, innovation, and leadership.

The firm’s concept was influenced by the nebula shape or the formation of future stars. Its facade will be covered entirely with a fritted glass design mimicking the limestone construction found on Obata’s adjacent museum building.

The proposals are part of a plan to Update the Smithsonian Campus by BIG and the construction of the Sculpture Garden by Hiroshi Sugimoto in The Smithsonian Museum Hirshhorn Museum, ArchDaily reported.