ABC’s Construction Backlog up in April; contractor confidence down 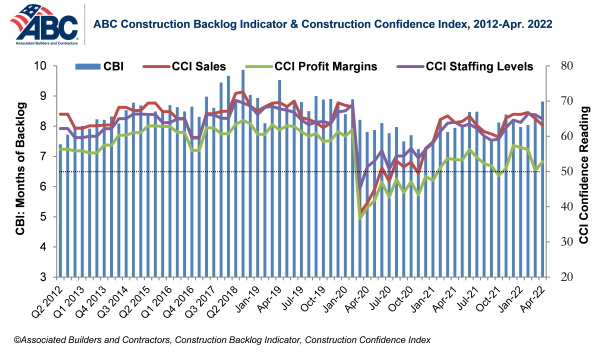 Associated Builders and Contractors (ABC) reported on May 10 that its Construction Backlog Indicator increased to 8.8 months in April, according to an ABC member survey conducted from April 20 to May 4. The reading is up 0.9 months from April 2021.

ABC’s Construction Confidence Index readings for sales and staffing levels declined in April, while the reading for profit margins moved higher. All three indices remain above the threshold of 50, indicating expectations of growth over the next six months. 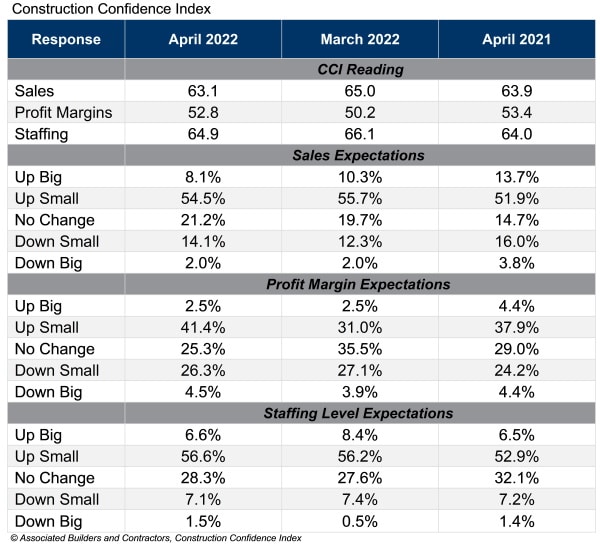 “The U.S. economy is facing many headwinds, but for now, the nation’s nonresidential construction segment is handling them,” said ABC Chief Economist Anirban Basu. “One might think that skilled worker shortages, sky-high materials prices, rising interest rates and financial market volatility would have affected industry momentum. Instead, backlog continues to rise, and contractors continue to expect sales, employment and profit margins to expand over the next six months. Demand for construction services remains strong. 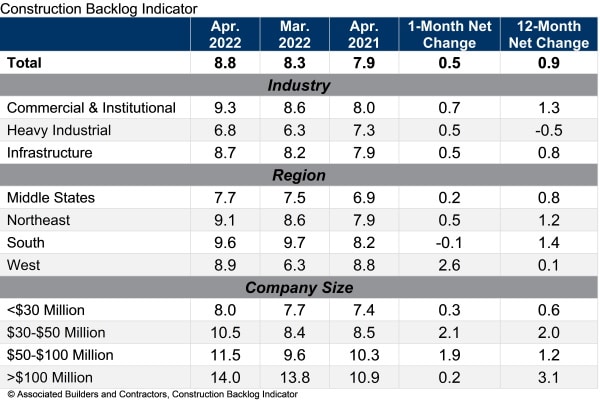 “Nonresidential construction is generally a sector that lags behind the broader economy, meaning emerging economic weakness will not show up in nonresidential construction data for months to come,” said Basu. “It is conceivable that the risk of recession is overstated, and that contractors will thrive during the years ahead because of significant infrastructure spending. Conversely, it is possible that the combination of higher interest rates, stubborn inflation, depressed confidence, geopolitical conflict and an economywide downturn will have fundamentally altered the industry’s outlook a year from now. Only time will tell.”

Monthly construction input prices decreased 2% in July, up 17% from a year ago, says ABC