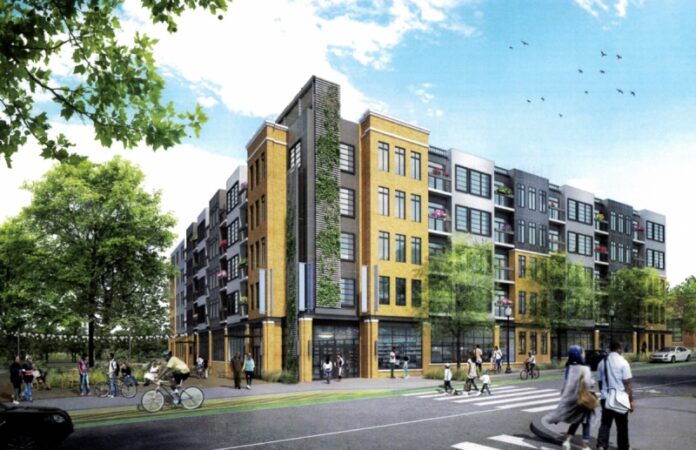 Construction is scheduled to start in September on The Asbery, a mixed-use building with 108 units of affordable rental senior (55+) housing and approximately 5,000 sq. ft. of commercial space. The Asberry will be located on 1200 Sumner Road SE, across from the Barry Farm Recreation Center.

“Barry Farm is the site of so much important history for DC and for families in Ward 8. The Asberry is the first step toward bringing families and seniors back home,” Bowser in an Aug 17 statement. “This redevelopment has been years in the making and as we get closer to shovels in the ground, we are investing in the past and the promise of the Barry Farm community and we are committed to delivering not just new housing, but new opportunity.”

Barry Farm–Hillsdale was established in 1867 for formerly enslaved African Americans to own land and create a self-sustaining community after the Civil War. The community was made up of organizations and leaders who advocated for racial and economic justice. This legacy continued with Barry Farm Dwellings, a public housing community constructed in the 1940s. The goal of the latest redevelopment is to return Barry Farm back to its roots of African American ownership and strong community ties.

Barry Farm is one of four New Communities Initiative (NCI) projects, along with Lincoln Heights, Northwest One, and Park Morton. NCI is a District Government program designed to revitalize severely distressed subsidized housing and redevelop neighborhoods into vibrant mixed-income communities.

The redevelopment of Barry Farm will begin with The Asberry in Phase I, with a total of 108 units. The Asberry, which will have replacement units for former public housing residents, will be 100 percent affordable, with 33 units at 30% of Median Family Income (MFI), 44 units at 50% MFI, 21 units at 60% MFI, and 10 Units at 80% MFI.

“Today, we celebrate a significant milestone of the revitalization of Barry Farm, a historic neighborhood home to generations of Black residents,” said Deputy Mayor for Planning and Economic Development John Falcicchio. “Over the years, the District Government has invested $43 million to revitalize Barry Farm through the New Communities Initiative, and we are happy to begin to see the promise come to fruition. Mayor Bowser is committed to preserving affordable housing for long-time District residents. Beginning construction of The Asberry is a vital step in ensuring residents can finally start to come home.”

To date, DMPED has provided approximately $43 million in funding for the redevelopment of the first phase of Barry Farm. This funding covers infrastructure, predevelopment, and vertical construction costs. Of the $43 million approximately, $14.5 million will used for the construction of The Asberry. The Mayor also signed the approval of the multifamily housing mortgage revenue bond for The Asberry of nearly $34 million today.

Preservation of Affordable Housing, Inc. (POAH) and District of Columbia Housing Authority (DCHA) will serve as co-developers for the site redevelopment. Once completed, the new redevelopment of Barry Farm will be a vibrant mixed-income community that will include at least 900 new affordable rental and for-sale housing units, of which 380 will be public housing replacement units.

In 2015, DCHA sought and obtained approval to demolish Barry Farm and relocate residents in a way that minimized displacement. As of 2019, all residents had been relocated, and Barry Farm has been demolished, except for the five buildings that the Historic Preservation Review Board (HPRB) landmarked.