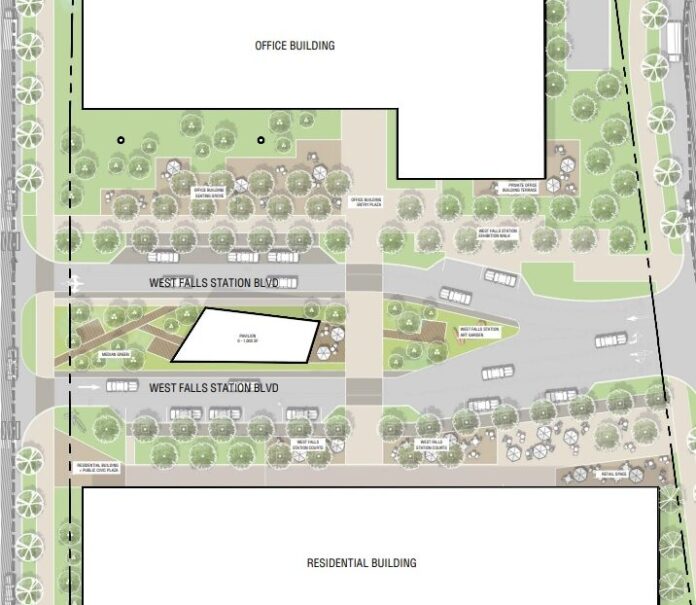 A developer has filed plans with Fairfax County to bring housing, retail, and new office and academic facilities to Virginia Tech’s campus in Idylwood.

Part of the development includes a 283,000-sq. ft. office and education facility to house HITT Contracting‘s corporate headquarters and a 40,000-sq. ft. laboratory space for Virginia Tech, described as the National Center for Smart Construction (NCSC), described in the application as “Building A”.

The application submitted on Sept. 22 provides additional details about an agreement between the City of Falls Church and Converge. The city plans to sell the approximately 7.5-acre site to the developer.

The project will “serve as a logical connection” between the West Falls development on Falls Church’s former George Mason High School property and a planned redevelopment at the West Falls Church Metro station, Walsh Colucci land use attorney Andrew Painter wrote in a statement of justification on Converge’s behalf.

Rushmark is also involved in the Metro project, which will turn the Metro station’s existing parking lots into housing and office buildings with some retail.

Converge’s Northern Virginia Center proposal includes about 820,000 sq. ft. of development across three buildings on two blocks west side of Falls Church Drive and north of Haycock Road. In addition to HITT’s HQ and educational development in the first building, the project also will include:

If approved, the project would link the West Falls and Metro developments by extending the former’s central West Falls Station Blvd through the property. Building C would be in the center of the street’s 12,300-sq. ft., publicly accessible median.

The “Median Green” on the boundary between the city and Fairfax County will serve as a green space with landscaping, trees, movable tables and chairs for “informal gatherings,” open lawn areas, an outdoor stage or performance space, and public art.

Other proposed amenities include entry plazas for both the office and residential buildings and public gardens on Haycock Road and Falls Church Drive. The latter’s garden would feature a bio-retention rain garden.

The developer says it will also provide approximately 0.29 acres of publicly accessible open space on the Metro redevelopment site as well as private, “vegetative” roof decks for the office and residential buildings.

As part of its transportation commitments, the applicant says it will upgrade the existing sidewalks on Haycock Road and Falls Church Drive, provide bicycle racks, and extend bicycle lanes planned for West Falls Station Blvd through the development. A total of 1,138 parking spaces will be provided, FFXNow reports.

“When constructed, this new neighborhood will function as one larger transit-oriented neighborhood,” Painter wrote. “The proposed NCSC facility will serve as a hub for research and testing of emerging construction methods, materials and technology that will inform Northern Virginia’s construction and real estate industries. Further, the proposal will attract individuals who think creatively, share ideas, and drive daytime demand locally-serving office and retail uses, as well as Metrorail ridership.”