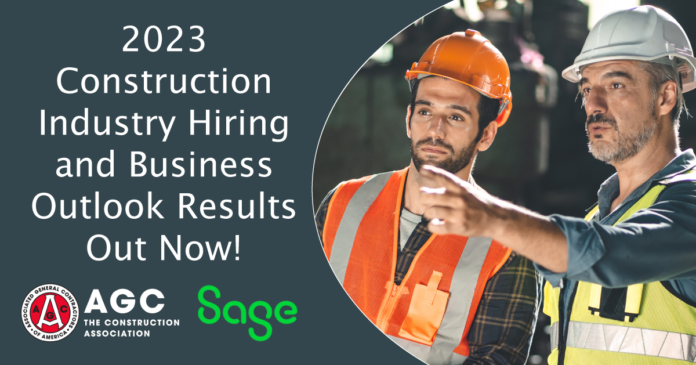 Construction contractors are less optimistic about many private-sector segments than they were a year ago, but their expectations for the public sector market have remained relatively bullish, according to survey results released on Jan. 4 by the Associated General Contractors (AGC) of America and Sage. The findings are detailed in High Hopes for Public Sector Funding Amid Workforce and Supply Chain Challenges: The 2023 Construction Hiring & Business Outlook.

“Contractors are optimistic about the construction outlook for 2023, yet they are expecting very different market conditions for the coming year than what they experienced last year,” said Stephen E. Sandherr, the association’s chief executive officer. “Even as market demand evolves, contractors will continue to be confronted by many of the challenges they faced in 2022, including the impacts of supply chain problems and labor shortages.”

The net reading—the percentage of respondents who expect the available dollar value of projects to expand compared to the percentage who expect it to shrink—is positive for 14 of the 17 categories of construction included in the survey. Respondents are most optimistic about infrastructure categories. There were net positive readings of 42 percent for both highway and bridge construction and transportation projects. Contractors are almost as upbeat about sewer and water construction, with a net reading of 38 percent. The net reading for federal projects is 37 percent.

The highest expectations among predominantly private-sector categories, with net readings of 28 percent each, are for power projects and other healthcare, such as clinics, testing facilities and medical labs. There is also a generally positive outlook for hospital projects and public buildings, with net readings of 23 percent each. Contractors on balance were optimistic, as well, about the education sector. The net reading for both kindergarten-to-12th-grade schools and higher education construction is 16 percent.

Despite the largely positive net readings, respondents are less confident about growth prospects than they were a year ago. For all but three project types, the net reading is less positive than in the 2022 survey. The steepest downturn in expectations occurred with multifamily and warehouse construction, both of which recorded declines of 31 percentage points from the net readings in the 2022 survey. The outlook for lodging construction slipped from modestly positive a year ago to negative.

However, an overwhelming 80 percent report they are having a hard time filling some or all salaried or hourly craft positions, compared to only 8 percent who say they are having no difficulty. (The rest have no openings.) In addition, the majority—58 percent—of respondents says either hiring will continue to be hard or will become harder. Only 15 percent say it will become easier or remain easy to hire, while 27 percent expect no change.

Workforce shortages likely explain why nearly three-quarters of firms increased base pay rates more than in 2021, compared to 62 percent that boosted pay more in 2021 than in 2020. Additionally, one-third of firms provided incentives or bonuses. And more than one-fourth of the firms increased their portion of benefit contributions and/or improved employee benefits.

Only 9 percent of firms report they have not had any significant supply chain problems in 2022. To cope with these problems, more than two-thirds of respondents have reacted by accelerating purchases after winning contracts. A majority turned to alternative suppliers. Almost half have specified alternative materials or products, while close to one-quarter have stockpiled items before winning contracts.

“The main reason for cancellations and postponements was rising costs—for construction, financing, insurance, etc.—which was cited by nearly half of contractors,” said Ken Simonson, the association’s chief economist. Click here to watch a quick video about the results.

Officials with Sage noted that despite rising costs and other challenges, construction firms will continue to invest in technology. The majority of firms surveyed said that their investment in 15 different types of technologies will either remain the same as last year or increase, with only 1-2 percent indicating that their investment would decrease in any of the technologies.

Stephens added that as with the past few years, the survey revealed that the greatest IT challenge is finding the time to implement and train on new technologies. However, it is vital that firms make the time, as utilizing new technologies, particularly cloud-based solutions with an open API, can alleviate other challenges. It can help to start slow and prioritize technology that can have the biggest and most immediate impact, then implement new technology in stages.

Association officials called on Washington leaders to resolve the significant uncertainties that exist around the Buy America provisions within the Bipartisan Infrastructure law, noting the administration has not settled on a uniform interpretation of those requirements. They also called on the Biden administration to act on the permitting reform measures that were included in the 2021 Bipartisan Infrastructure Law. And they called on Congress to pass immigration reforms and boost investments in career and technical education programs.

“We are supporting the industry as it works to overcome the challenges it faces,” Sandherr said. He noted that the association was partnering with its chapters to run digital workforce recruiting campaigns and has signed up over 800 firms to participate in the association’s Culture of Care program. That program helps firms better attract and retain talent, particularly diverse talent.

Sandherr said the association would also continue to be a vigorous advocate for the industry in Washington and with public officials across the country. “We will do everything in our power to make sure that 2023 is a successful one for the industry, our members and the tens of thousands of men and women that they employ,” Sandherr said.