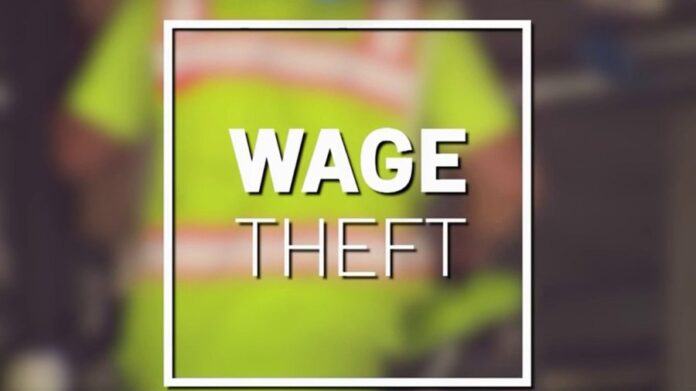 Regional authorities in the Washington DC area have investigated more than 50 possible cases of wage theft since 2017, including a range of complaints from construction employees working from the nation’s capital through Richmond, Virginia, NBC-4 has recently reported.

“Wage theft (is) still rampant around the area when workers need the money the most,” Castro said.

One employee who said he’s been a victim spoke to NBC4’s I-Team, saying, “I must say (at) 90% of the construction sites, this is happening right now.”

Virginia recently toughened its laws and penalties for wage theft.

DC officials say the district is one of the most progressive in the nation when it comes to wage theft, according to D.C. officials. Local rules make employers liable for as much as four times the amount of unpaid wages, with administrative penalties.

The broadcaster’s investigative reporters discovered that at least 20 of the cases have resulted in legal action from the DC Office of Attorney General since 2019, while several other wage theft allegations have triggered pending federal civil lawsuits by groups of workers.

These actions led to settlements of as much as $3.2 million in restitution for workers and nearly $2.7 million in penalties in DC in the last four years.

In some of the cases reviewed by Channel 4’s reporters, workers were paid partly in cash. “In other cases, the workers allegedly earned less than minimum wage, did not have proper taxes withheld or were misclassified as independent contractors,” the broadcaster reported.

“When this happens, we all suffer, because the tax revenues that then come in to the city coffers are much less than what they otherwise should be,” said attorney Matthew Handley, who has filed recent civil lawsuits alleging wage theft by construction contractors in Virginia and Washington, DC.

Handley said that when a worker is misclassified as an independent contractor, they don’t always get the allowed overtime pay or health benefits that a full-time employee would get under the law.

His lawsuits allege a series of incidents in which subcontractors hired for a project then hired labor brokers to find workers. Racine said those labor brokers often decide how the workers are paid.

One project referenced in Handley’s lawsuit is the construction of a new office complex for the Virginia General Assembly.

“In the lawsuit, construction workers accuse a subcontractor and labor broker of failing to maintain proper records or pay full wages, including overtime pay,” NBC-4 reported. “The  suit alleges, ‘Defendants were required by law to provide plaintiffs and other similarly situated individuals … pay stubs detailing their hours worked and their pay rate, but failed to do so.'”

The labor broker declined comment. The subcontractor told the NBC’s I-Team it denied the allegations in the lawsuit and that “it acted properly in its contracting and payment practices. We look forward to defending our position in this matter.”

The I-Team watched as that worker collected his payment from a small market near Richmond, partially in cash.

Racine said, “That’s a red flag. It’s not always the case that a wrong or wage theft has occurred, but that certainly is an indicator that someone is engaging in wage theft.”

We reached out to the owner of that labor broker company several times, but he did not call us back.

The I-Team also watched on multiple occasions a series of workers collecting payments out of the window of a pickup truck in a furniture store parking lot near Chesterfield. Handley and Racine said such informal payment methods are often a sign of wage theft.

When the I-Team questioned the man who appeared to be distributing the payments, he said everything was “on the level.”

A woman who said she’s worked for the company for 12 years jumped in, adding no laws were being broken.

We also reached out to the company’s attorney, who had no further comment.