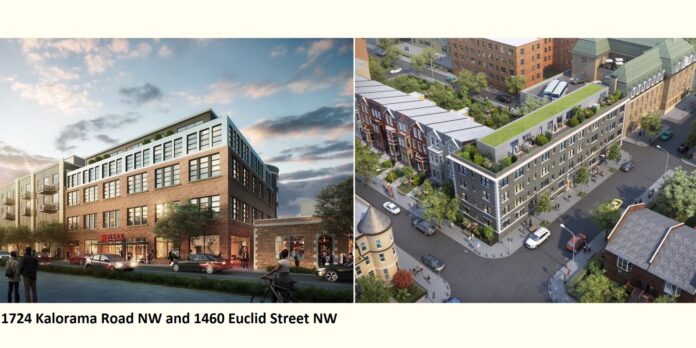 Community organizers are redeveloping two properties in Ward 1, resulting in the production and preservation of 50 affordable housing units.

The 22,000 sq. ft. Kalorama Road renovation of a vacant commercial building will also create 6,000 sq. ft. of space to expand the Sitar Arts Center and allow for additional summer youth arts programs and digital media programs for young adults, the mayor’s office says in a statement.

“When we call on the community to work with us on innovative ways to add more affordable housing, these are the types of projects we are talking about,” said Mayor Bowser. “Not only will these two projects keep 50 families in our city, we are also expanding opportunities for our young people to learn and grow in a world-class arts center.”

The Kalorama Road site will be redeveloped into a five-story mixed-use building, offering affordable multi-family housing. Once renovated, two-thirds of the 25 units will be two- and three-bedroom units, addressing a citywide need for family-sized apartments. Additionally, two-thirds of the units will be reserved for families earning at or below 30% of the area median income – $35,150 for a family of four. The site was acquired by Jubilee Housing in 2018.

The Euclid Street property was also acquired in 2018 after the tenant association assigned its right to purchase to Jubilee Housing through the District’s Tenant Opportunity to Purchase Act (TOPA). The project will preserve 25 units of deeply affordable housing, including five three-bedroom and two four-bedroom units.

“As we begin to rebound from the pandemic, it is critical to invest in initiatives that provide access to prosperity for residents with fewer financial resources. Locating deeply affordable housing in resource rich neighborhoods helps connect residents to greater opportunity, while promoting greater inclusion and equity for the city as a whole,” said Jubilee Housing CEO Jim Knight.

Mayor Bowser announced the selection of the EucKal project for further underwriting in March 2021. The project was selected from applications to the District’s 2019 Consolidated Requests for Proposals and was provided over $16 million from the Housing Production Trust Fund as well as other public and private financing.

The statement says Bowser, in the District’s Fiscal Year 2023 budget, has invested $444 million in the Housing Production Trust Fund as well as $41 million in project-sponsor vouchers to make housing deeply affordable for low-income residents.

“At the start of her second term, Mayor Bowser set a goal to deliver an additional 36,000 units of housing – including at least 12,000 units of affordable housing – by 2025. By distributing these goals across the District’s ten planning areas, Mayor Bowser made DC the first jurisdiction in the nation to create affordable housing goals by neighborhood. From January 2019 through July 2022, the District has produced 24,998 net new units, of which 6,243 are affordable,” the statement says.