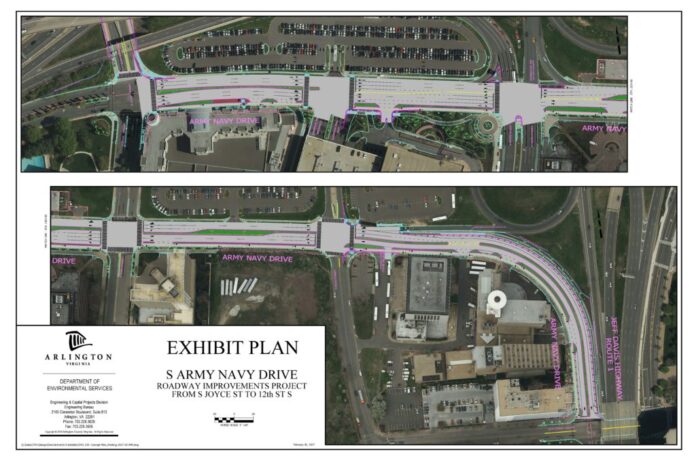 Construction has started on a $10.6 million project to make improvements on a 1.2 mile segment between the Pentagon City and Crystal City neighborhoods in Arlington County.

A statement from the county at the groundbreaking on Oct. 25 says the Army Navy Drive Complete Street project includes widened sidewalks, shorter pedestrian crossings, a two-way curb-protected cycle track, and additional segments of dedicated bus lanes that will form part of the Transitway Extension to Pentagon City.

The project is being funded primarily through a partnership with the Federal Highway Administration (FHWA)’s Federal Lands Access Program and the Northern Virginia Transportation Authority (NVTA).

“This project is a such an important investment for Pentagon City and Crystal City because it will transform Army Navy Drive into a welcoming, safe and accessible street for all users. Transportation options that connect our communities are essential for sustainable, livable growing neighborhoods,” said Katie Cristol, Arlington County Board Chair and a board member with the NVTA.

“Enabling residents, workers and visitors to walk, bike, take transit and drive safely on Army Navy Drive will help achieve the County’s plans for an 18-hour city in Pentagon City and Crystal City, with a vibrant range of places to live, play and work all easily accessible no matter how you get around,” Cristol added.

When complete, Army Navy Drive will deliver two blocks of dedicated bus lanes for the Transitway Extension to Pentagon City between the Pentagon City Metrorail Station to the future Washington Metropolitan Area Transit Authority (WMATA) Metrobus facility at the Pentagon, extending Metroway service to the headquarters of the U.S. Department of Defense. It will also support connectivity between Pentagon City and Columbia Pike on WMATA’s Metrobus 16-series routes.

The cycle track will connect Pentagon City and the Aurora Highlands neighborhoods to the future Crystal City Bike Network. It is designed to accommodate bike riders of all comfort levels to access the Mount Vernon Trail and the future Long Bridge bike and pedestrian bridge to Washington, D.C.

“NVTA is excited to celebrate the start of construction on this project that will not only benefit Arlington County, but the entire region,” said Monica Backmon, Chief Executive Officer of the Northern Virginia Transportation Authority.

“As National Landing continues to grow, investments such as this are vital to keeping the region connected through a multimodal transportation network that enhances the quality of life of Northern Virginians by providing alternatives to the single-occupied vehicle,” Backmon said in the statement.