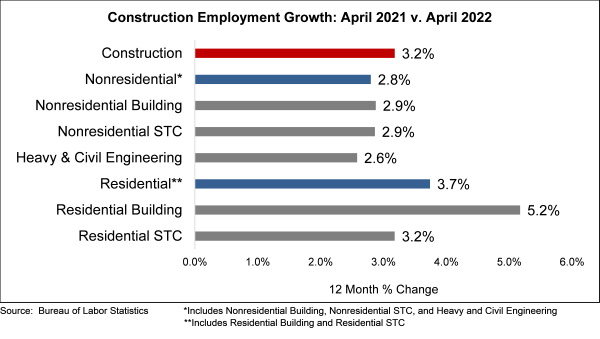 The construction industry added 2,000 jobs on net in April, but nonresidential construction employment decreased by 2,000 positions, according to an Associated Builders and Contractors (ABC) analysis of data released today by the U.S. Bureau of Labor Statistics. On a year-over-year basis, industry employment has expanded by 235,000 jobs, an increase of 3.2%. 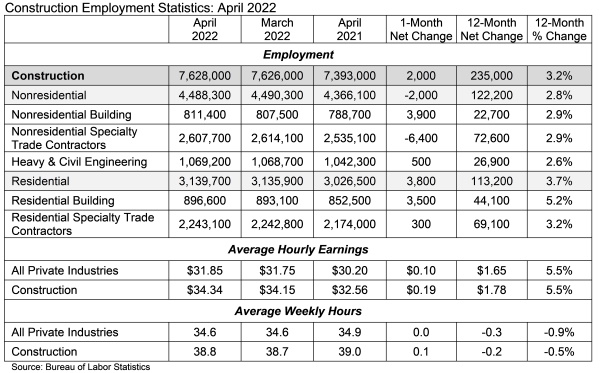 The construction unemployment rate dropped to 4.6% in April. Unemployment across all industries remained unchanged at 3.6% last month.

“The strength of the U.S. economy is fading, but labor market data tend to be lagging indicators,” said ABC chief economist Anirban Basu. “For now, the labor market remains strong as contractors and other employers compete for scarce skill sets. In March, there were approximately 11.5 million available, unfilled jobs in America, roughly 400,000 of them in construction. As more people return to the labor force, some chasing higher wages, America continues to add jobs at a rapid pace.

“For now, that will help support economic momentum,” said Basu. “Not only are job totals climbing, but many people are earning far more than they did pre-pandemic, fueling household spending power and keeping the recovery afloat. But with inflation steadily hammering away at household balance sheets and interest rates rising, spending growth will slow, and so will the pace of employment gains.

“Based on ABC’s Construction Confidence Index, contractors collectively expect to hire staff during the months ahead,” he said. “Many construction firms report operating at capacity. Hiring is a mechanism to expand that capacity. But with the cost of capital, materials and labor rising, demand for private construction services could soften next year. The risk of recession continues to rise.”