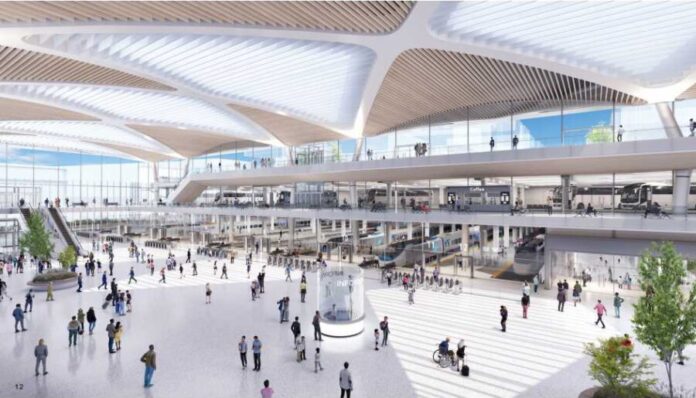 Architects have provided renderings to show what DC’s Union Station could look like once it is redeveloped and expanded.

Nikolas Dando-Haenisch of Grimshaw Architects presented the renderings to the U.S. Commission of Fine Arts on June 16, including a new train hall and mezzanine and modernized tracks and platforms.

The architects stressed the importance of creating a bright and expansive space that is more accessible for visitors, by adding a new train hall that would connect people to all the different modes of transportation offered at the station, and new entrances so people can enter from different parts of the city, including H Street Corridor, DCIst.com has reported.

“The hope is to take what is currently a below ideal space for passengers, and open that up, and get on and off buses and trains in a straightforward fashion,” Dando-Haenisch of said during the presentation. The Commission of Fine Arts reviews and approves design proposals for select public and private properties in D.C.

The Federal Railroad Administration (FRA) — part of the U.S. Department of Transportation — owns Union Station, so it is leading the transformation of the nation’s second-largest rail hub. But many government agencies and private entitles are also involved.

Amtrak is also involved in the project because the rail service owns the tracks and leases other portions of the station. The expansion of Union Station is costly, so parties involved are eyeing federal dollars from infrastructure legislation signed into law by President Joe Biden last year, DCIst reported.

It is premature to estimate costs and the project’s timeline, said FRA communications director Dan Griffin. However, an earlier draft of the project estimated costs of about $10 billion, with the renovation completed by 2040.

Developer Akridge plans to create residential and commercial buildings next to the center space with greenery, along the 15 acres of air rights north of Union Station.  However, the proposed $3 billion Burnham Place is contingent on the station’s redevelopment.

“The latest design accounts for public feedback, including from local government officials who were critical of an earlier proposal that had a massive parking garage,” DCIst.com reported “Members of the Commission of Fine Arts seemed to largely support the plan, however a few voiced reservations that the historic building would become just a passthrough to the new train hall.”

The Federal Railroad Administration needs to complete more steps, including an environmental impact statement, before the project enters the final design phase and construction, Griffin said.

Facebook
Twitter
Pinterest
WhatsApp
Previous article
GCS-Sigal building $15.4 million Stead Park Recreation Center
Next article
43 states and DC add construction jobs during the past year, but only 22 states added construction jobs between April and May amid labor and supply shortages