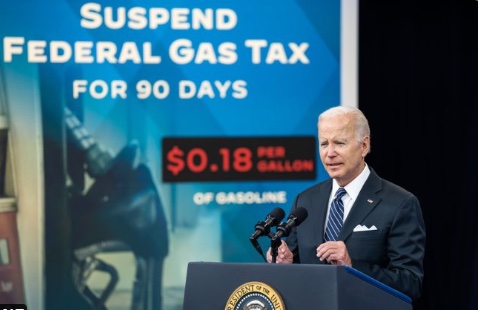 “We can bring down the price of gas and give families just a little bit of relief,” Biden said in a White House address.

The price of gas is up dramatically around the world, and by almost $2 per gallon in the U.S., since Putin began amassing troops on the border of Ukraine.

Specifically, Biden is calling on Congress to suspend the federal gas tax for three months, through September, without taking any money away from the Highway Trust Fund. And he is calling on states to take similar action to provide some direct relief, whether suspending their own gas taxes or helping consumers in other ways.

Right now, the federal government charges 18 cents per gallon of gasoline and a 24 cent tax per gallon of diesel fuel. Those taxes fund critical highways and public transportation, through the Highway Trust Fund. But in this unique moment, with gas prices near $5 a gallon on average across the country, President Biden is calling on Congress to suspend the gas tax for three months – until the end of September – to give Americans a little extra breathing room as they deal with the effects of Putin’s war in Ukraine.

The President is also calling on Congress to make sure that a gas tax holiday has no negative effect on the Highway Trust Fund. With our deficit already down by a historic $1.6 trillion this year, the President believes that we can afford to suspend the gas tax to help consumers while using other revenues to make the Highway Trust Fund whole for the roughly $10 billion cost.

In addition to federal gas tax relief, the President is calling on state and local governments to provide additional consumer relief. Already, some states and local governments have acted: for example, in Connecticut and New York, governors temporarily suspended their gas taxes, and in Illinois and Colorado, governors delayed planned tax and fee increases.

Facebook
Twitter
Pinterest
WhatsApp
Previous article
43 states and DC add construction jobs during the past year, but only 22 states added construction jobs between April and May amid labor and supply shortages
Next article
G7 leaders launch Partnership for Global Infrastructure and Investment

Builders ‘giving away everything but the kitchen sink’ to attract bidders: Redfin report