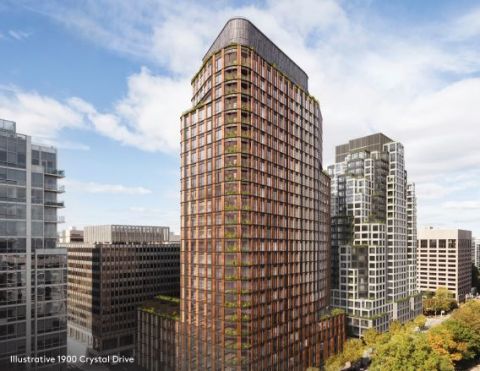 The developer did not disclose the project’s actual construction cost in its statement.

Building permit records indicate Clark Construction Group LLC will be the general contractor. A permit was issued to Clark and JBG SMITH on Feb. 24 for “installation of support of excavation P1 and P2.”

JBG SMITH says in a statement that it successfully bid and secured a guaranteed maximum price contract for the project that is more than 7.5% below pre-pandemic pricing.

The approximately 300-foot tall buildings were designed by architect COOKFOX in collaboration with Torti Gallas + Partners.

In 2018, National Landing was chosen for Amazon’s new headquarters, and JBG SMITH was named the developer, leasing agent, and property manager for the project.

“The introduction of new residences, restaurants and shops at 1900 Crystal Drive, combined with our recently delivered retail and entertainment district just about a block away will more than double the concentration of street-facing retail amenities on Crystal Drive,” Greenberg said in a statement. “The thriving, mixed-use environment will allow people to easily walk from their home or office to their favorite restaurants and amenities – cementing National Landing as a destination both day and night.”